Quakers view weapons of mass destruction to be immoral and illegal. Quakers work with other organisations, policy-makers and civil society to rid the world of nuclear weapons.

"We believe that no one has the right to use [nuclear] weapons in his defence or to ask another person to use them on his behalf. To rely on the possession of nuclear weapons as a deterrent is faithless; to use them is a sin." – Meeting for Sufferings, 1955, Quaker faith & practice 24.41

Banning nuclear weapons: where we are today

“This is an imperfect treaty, but it is hugely significant as a step towards stigmatising and de-legitimising these weapons. And it will certainly go down in history as one of the most important nuclear disarmament treaties of all time." – Timmon Wallis, then Peace and Disarmament Programme Manager, 2017

In 2017, negotiations at the United Nations resulted in the adoption of a treaty banning nuclear weapons. After months of talks, 140 member nations passed the treaty, meaning that 73% of 192 member nations support the ban. By September 2017, 53 nations had signed the treaty into force.

The development, testing, production, financing, transferring, stockpiling, use and threat of use of any nuclear weapon is now prohibited in the participating countries. This is the biggest step forward for nuclear disarmament campaigners in decades.

Quakers in Britain joined more than 440 non-governmental organisations in supporting the treaty, including the World Council of Churches. The delegate for Quakers in Britain, Timmon Wallis, represented a coalition of faith communities and helped frame how nuclear disarmament can be achieved over the coming months and years.

Having nonviolently opposed Britain's nuclear weaponry for over 60 years through public protest, direct action and political advocacy, Quakers are well known for their position on disarmament and we continue to push for changes in the UK government's approach to the issue.

The International Campaign to Abolish Nuclear (ICAN) made this short animation of Hiroshima survivor Setsuko Thurlow's passionate call to action on the day that the Prohibition of Nuclear Weapons was adopted.

Lobby the UK government to back the nuclear ban 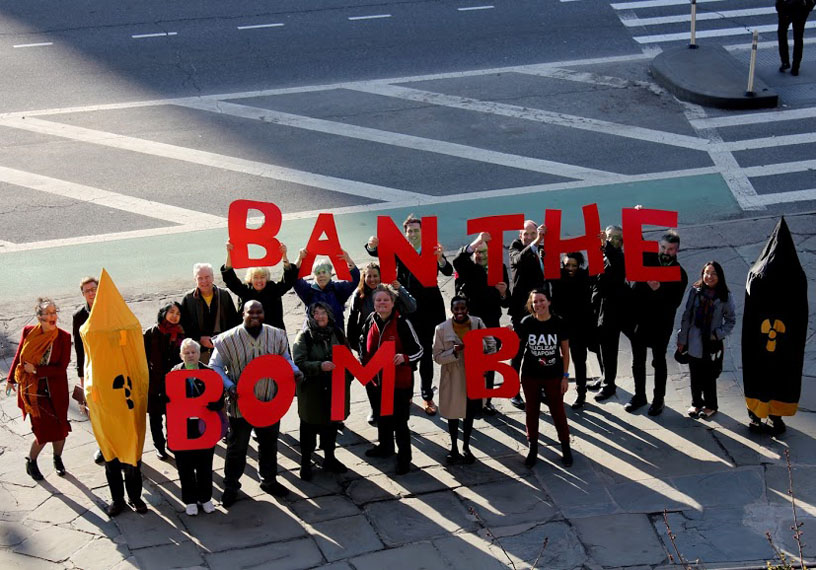 The UK government, together with the US and most other NATO states, chose to boycott the 2017 nuclear ban negotiations despite long-standing UK government policy to support nuclear disarmament 'through a multilateral process'. Yet the widespread adoption of the UN treaty means there is cause for hope in encouraging real political engagement with the topic of nuclear disarmament. Quakers can help build political will around the treaty in the UK.


In spite of much protest, in 2016 parliament voted to begin the process of upgrading the UK's Trident nuclear weapons system. Trident replacement will cost the UK an estimated £205 billion. It will last well into the second half of this century. Quakers and millions of others in Britain continue to oppose Trident as unnecessary, unaffordable and utterly at odds with our commitment to peace, which allows no role for weapons of mass destruction.

How did we get here?

Britain detonated its first atomic bomb in 1952, and has retained nuclear weapons ever since. In 1968, Britain signed the Non-Proliferation Treaty (NPT), committing to disarm in 'good faith' and 'at an early date'.

The current Trident nuclear missile programme is expected to remain operational until the early 2030s, by which time the government now expects a new generation of Trident nuclear submarines to take their place.

Meanwhile the Trident missiles themselves are being upgraded by the US and these will gradually replace the existing missiles. The nuclear warheads on top of the missiles are produced at Aldermaston, where there is a multi-billion pound programme already underway to design and develop a new set of warheads for the new submarines.

Email your MP or MSP, calling on them to sign the ICAN Parliamentary Pledge. You can do this easily using ICAN's sample email.

Contact your elected representatives, calling on them to oppose the renewal of Trident. You can do this easily using www.writetothem.com (offsite link).