The case for peace education

Quakers believe education is a key part of building peace. Here, we draw on case studies and evidence to demonstrate the case for integrating peace education into British schools.

What difference can peace education make?

Peace at the heart: a relational approach to education in British schools is a detailed report from Quakers in Britain bringing together evidence and recommendations. Download your copy (PDF).

From 6 March 2022 we will be releasing six short films to showcase peace education in action. Each film focuses on a different primary or secondary school that invests in building peace, whether though exploring identity and inclusion, training in conflict resolution, or tackling global issues. The schools featured are in Staffordshire, Leeds, London, Merthyr Tydfil and Birmingham.

Following release of the films we will share our report, Peace at the Heart: A relational approach to education in British schools.

Meet the Sixth Formers resolving conflict at Bacon's College. The school works closely with CALM, a local mediation service, to equip Sixth Form students with conflict resolution skills. The Peer Mediation scheme has operated for over a decade, thriving due to the support from teachers and professional mediators.

Rated by OFSTED as 'outstanding' for 'behaviour and safety of pupils', this inner-city secondary academy also saw a significant reduction in school exclusions in recent years.

The peer mediators, aged 16-19, have a high profile in the school and help other students address challenging issues including name-calling, bullying and fights. Some even join adult mediators working in the community.

Bode, a former peer mediator, went on to win Community Mediator of the year award in 2021, having first started his work in conflict resolution aged 16. Other alumni have spoken in Parliament and national Mediation Conferences.

Training to be peacemakers

How can we help children find creative ways to handle conflict?

This five-minute film shows Coleshill Heath School (CHS), a large community primary school in Solihull, taking on this challenge. The school works with Peacemakers, a Quaker peace education project that has been helping schools in the West Midlands handle conflict for over 30 years.

Peacemakers supports the school to train their students in peer-mediation – conflict resolution for young people, by young people - and establish a scheme in which students are available to mediate disputes at playtimes.

We see the training in action. The young mediators learn about 'the conflict escalator' and how to 'take out the blaming language' from the stories they listen to. We hear from the children what it means to be a peer-mediator, and from staff about how the scheme fits in with the school's restorative ethos.

"I do think every school could benefit from peer mediation" says Jackie Zammit, Peace Education Programme Director at Peacemakers, "If you're motivated by peace, if you believe in peace, if you're not ashamed to talk about peace…that's when transformation can happen".


Find out more about www.peacemakers.org.uk.


Being a Peace School

Cyfarthfa High School was one of Wales' first 6 Peace Schools, a network that had now grown to over 40 schools with the Welsh Centre for International Affairs.

The school also draws extensively on the peace heritage of Wales, studying the dilemmas of World War I conscientious objectors and key figures in local history, such as Anuerin Bevan.

Year 8 pupil Natalie Nawara said: "Learning that some great women came from Merthyr, for example, pioneer linguist, Chartist supporter and educationalist Charlotte Guest, shows we can do something too."

Pupils have gone on to make their voices heard outside the school, including giving presentations at Scouts, being elected to the Merthyr Youth Council and the UK Youth Parliament. Corey Shemwell, year 9, said: "It's important to speak up because if we don't, who will?"

The Peace School scheme is freely available to primary and secondary schools across Wales. Schools can work towards level 1 or level 2 accreditation and are given peace school status in annual Peace Conferences in November. Contact centre@wcia.org.uk for more details.

"Carr Manor Community School is committed to a relational approach to a child's education and building resource and capacity to develop their character and skills for life." Simon Flowers, Executive Principal.

In the film, we witness the school's investment in interpersonal relationship-building through regular coaching circles and restorative practice. OFSTED calls the coaching programme a "major strength of the school", and a pupil said "I'll always have a family, one member of staff I can go to if I have a problem".

The pupils also looked at global issues through the Creative Arts Study School, which focused on diversity and studied stories of peacebuilding from around the world. Pupils not only learnt about issues like diversity, Palestine & Israel, deportation flights, but made creative responses through art, drama, dance and music. These are complex issues, but the Study School let the children develop their responses over weeks.

"The confidence that the children have... Normally that's a skill that you acquire later in life, but because they're empowered and they know that the adults around them really care about not only their academics but how they develop as a person, you can see that in how confident they are..." Bena Asomaning, English Teacher.

Something will be different

How can schools create a different world in the face of injustice?

Elizabeth Garrett Anderson School is a comprehensive secondary school for girls situated next to King's Cross railway station in London. The school has a very clear sense of purpose. The film takes us into workshops tackling issues of class, race and sexuality. Head of History Hamidah Siddiqua leads a discussion, prompted by students, about the situation faced by the Uyghur population in China.

Education plays a crucial role in tackling injustice and discrimination. Headteacher, Sarah Beagley, doesn't shy away from the difficult issues students have to deal with "They do live in communities where they deal with violence, they deal with racism". Sarah is equally clear that whilst she can't necessarily change what happens outside the school gates, "we very clearly set out to say that in in this school, this this place, in this community, something will be different."

How does a school embrace peace education? We see how John of Rolleston Primary School, in the village of Rolleston-on-Dove, Staffordshire, puts peace at the heart of its community. The film features some of the children's own animations, exploring what they think a peaceful school, and peaceful classroom look like.

The school works closely with Peacemakers (Peacemakers: peacemakers.org.uk), a charity in Birmingham. Initially sceptical, year 3 Teacher Samantha Duda Spencer, explains the impact she sees regular Peacemaker circle time having on the children. "They will be our citizens of the future; they'll need to know how to manage conflicts, how to work together, how to be resilient, how to support and listen, teaching them from a young age will really do that".

Headteacher, Richard Simcox, explains how peace education, "has a longevity and has an impact" which is why they have decided to "hold onto it" as part of the school's core values. "If all children had the opportunity to learn peacebuilding skills, and to take part in a curriculum led by peace, supported by peace, then we would have a more peaceful society. We wouldn't necessarily have less conflict, but we would have better ways of managing that conflict". 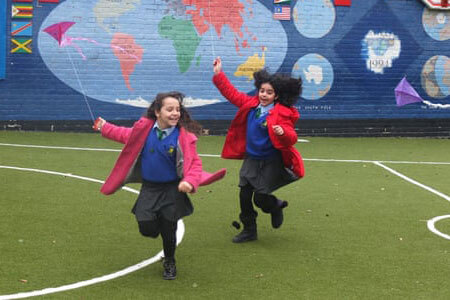 Quakers work to end war and violence at the roots and build a more peaceful world. That needs education to build positive relationships at all levels. Visit our peace education web page.