Quakers have historically been campaigners for penal reform, as well as strong defenders of human rights. Our overall vision for a criminal justice system is one that is compassionate, forgiving and healing; a system that is restorative, not retributive and balances the needs of the victim with the reintegration of the offender into society.

Earlier this year Quakers in Scotland, and Britain Yearly Meeting sent in a joint submission (PDF) to the Equalities Committee of The Scottish Parliament on prisoner voting.

Imprisoning someone for a crime involves the temporary denial of liberty and mobility. But the act of imprisonment does not remove a prisoner's humanity, personhood or membership of the society that has judged them. What a person can and cannot be imprisoned for has evolved over time, sometimes behind or ahead of, the societies surrounding them.

The right to vote is a basic civil right, not a privilege. One of the basic tenants of civil rights is that we all have them, all the time, whether those in power choose to allow us to exercise them or not. The recognition of prisoner voting rights needs to start from the assumption that prisoners should vote, if they wish to. This still leaves room for argument about selective exemptions in rare (and probably offence-specific) cases.

The naming and upholding of rights is how humanity tries to ensure that all are treated with fairness and equality. The Universal Declaration of Human Rights, for example, helps us to hold each other to high standards and be the best that we can be.

Quakers care because we believe that there is love and goodness, a bit of God, in everyone, even when a person's crime has caused harm. While it is true there will always be a small population who society needs to be protected from, we also believe that everyone deserves a chance to change their behaviour, to learn and to grow. Many in the prison population have not been able to learn to read and write, or had effective support for good mental health. Such support can be made available.

Being prevented from exercising the right to vote is termed 'civic death' and pushes prisoners further from society, rather than bringing them closer. Connecting with community in positive and healthy ways can help encourage people to take positive and healthy paths in life.

In public debate, prisoners are often talked about as a class apart, as almost a different species, or subset of humanity. This should not be the case. We do not believe that prisoners should be seen as undeserving. In recognising prisoners' humanity, we also have to recognise our own privileges such as growing up with a good education in a stable and supportive atmosphere, and confront the parts of our society that are haphazard or failing, like the support system of the welfare state and growing inequality.

Many other countries do uphold the right of prisoners to vote, including Canada, France, Croatia, the Netherlands, Norway, Peru, Poland, Serbia and Sweden.

The right to choose

Reading other submissions to the Equality Committee, it is possible to see that many groups who represent current and former prisoners are keen for prisoners to retain their right to vote as part of a rehabilitation process.

The non-prison population has an automatic right to vote in their own country and Quakers in Britain would encourage as many people as possible to do so. As soon as the state considers you old enough to vote (16 in certain elections), you can decide whether or not to use your right to vote. Choosing not to vote does not result in your loss of that right. Rights are inalienable and as such cannot be forfeited.

Quakers assert this because of their concerns for equality and peace. We see the Universal Declaration of Human Rights as a means to build a world for the common good. It states, 'equal and inalienable rights of all members of the human family is the foundation of freedom, justice and peace in the world'.

A majority of the Equality and Human Rights Committee of The Scottish Parliament has recommended that voting rights be extended to prisoners with custodial sentences. It is doubtful that the Scottish Government would fully extend the franchise to all prisoners, but we are hopeful that the Scottish Government will undertake a wider consultation on the issue. One in which Quakers can take an active part in making their voices heard.

Find out more about Scottish advocacy

Mairi is Parliamentary Engagement Officer (Scotland). She articulates Quaker views to politicians and civil servants and works with the Scottish Parliament, Government, and Scottish MPs at Westminster. She supports Quakers to work with the Scottish political scene. 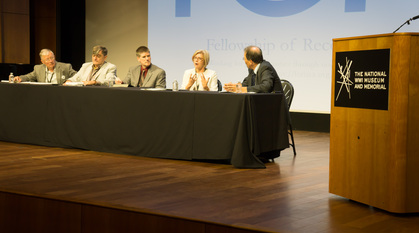 Remembering the conscientious objectors of World War I in Kansas City

On the centenary of the USA's involvement in World War I, Jane Dawson reflects on how conscientious objection was one of the sparks that ignited a century of change. 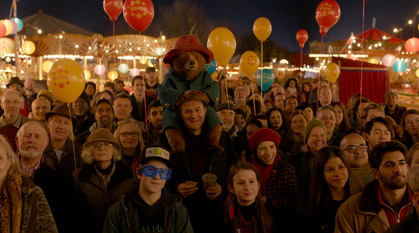 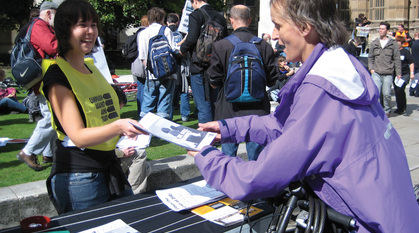 Each year we place dedicated people in radical peace organisations to equip them for a life working for peace. This year we're looking to fund a third peaceworker and we need your help, says Sam Walton.