This is a time for remembrance, reflection and action.

The Hibakusha, (survivors) have written this message:

"Seventy five years ago we dedicated our lives to making sure that our generation would be the last Hibakusha – the survivors of the atomic bombs. We learned to be brave, hopeful and bold. We learned that it is up to people like you and me to stand up against nuclear weapons and the leaders who threaten the world with them.

“The last great challenge we face is to ban and eliminate these weapons. Face it with us. We're nearly there."

Quakers in Britain work with other organisations, policymakers and civil society to rid the world of nuclear weapons. In 1955, Meeting for Sufferings said, "We believe that no one has the right to use [nuclear] weapons in [their] defence or to ask another person to use them on [their] behalf. To rely on the possession of nuclear weapons as a deterrent is faithless; to use them is a sin." (Quaker faith & practice 24.41)

The last great challenge we face is to ban and eliminate these weapons.

Quakers support the Nobel Peace Laureate group, the International Campaign to Abolish Nuclear Weapons, or ICAN, which urges governments to support and ratify the Treaty for the Prohibition of Nuclear Weapons. ICAN and other global disarmament NGOs are actively supporting many events and initiatives as part of the 75thanniversary of Hiroshima and Nagasaki.

Around the world, many commemorative events and vigils have moved online to avoid the risks of COVID-19.

From 8.15 am Thursday 6 August, exactly 75 years since the first atomic bomb was dropped, there will be a 15 minute film-collage of extracts and images from Michael Mears' forthcoming theatre play about Hiroshima, called “The Mistake". This features himself and Japanese actress You-Ri Yamanaka. Watch on YouTube from 8.15am on Thursday 6 August on https://youtu.be/QURQZ6WUU_g 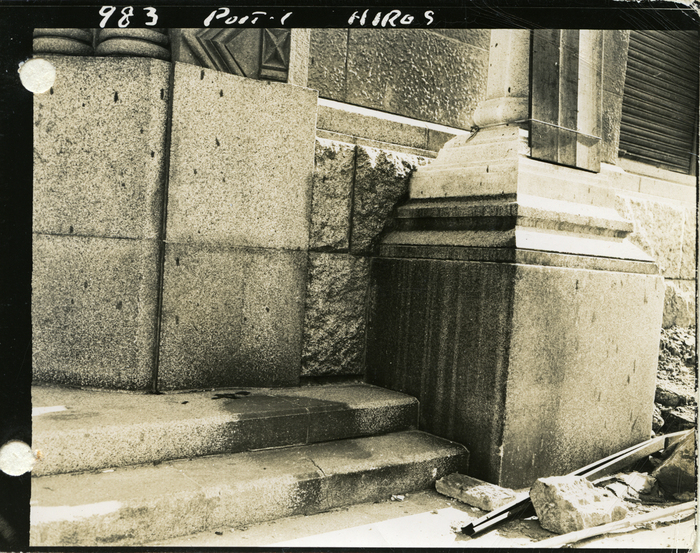 All that remained of many killed by the atomic bombs was their shadow. Seen here as flash burns on steps of Sumitomo Bank Company, Hiroshima branch. Unknown author / Public domain (offsite link)

Read the experiences of the Hibakusha on ICAN 75th anniversary website - https://rise.icanw.org/