The Ride arrived in London. Three hundred miles across vale and cities, they carried their Declaration from Cumbria and handed it in to 10 Downing Street.

One of the team, Sally Ingham said they were pleased to have completed the journey together. “Along the way, people told us they were becoming invisible and powerless. They are unable to voice what is happening to them." Their experiences will be collated. 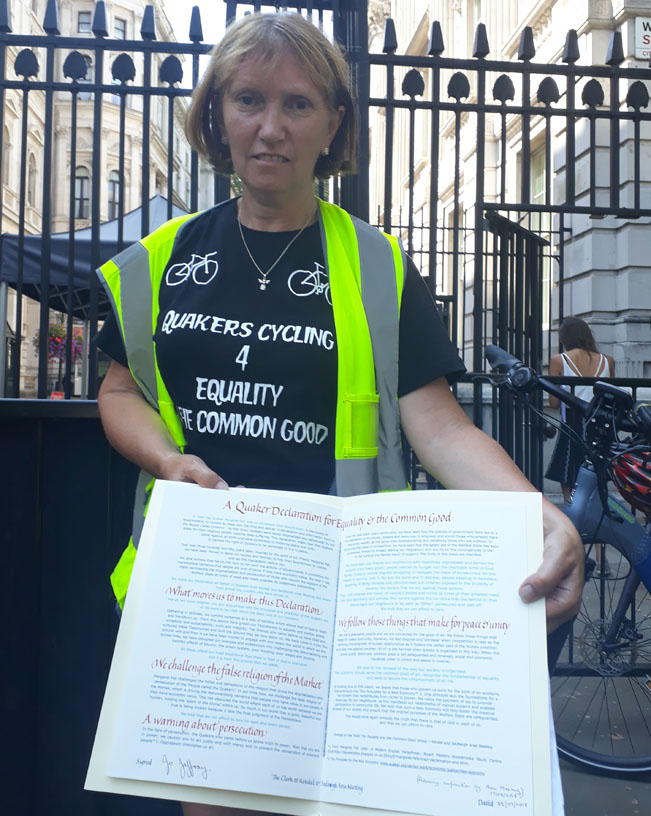 Inspired by faith and disturbed by rising social and economic inequality, this week a group of Quakers are taking to their bikes and mobility scooters to ride from Cumbria to deliver a message to 10 Downing Street. Their ride will take 12 days.

They are following the path of Margaret Fell. She helped establish the Quaker faith. Nearly 360 years ago she rode on horseback from Swarthmoor Hall in Cumbria to London. In a spirit of nonviolence she gave the king a declaration to appeal to end the persecution and suffering of Quakers.

We should not stand by and watch the most vulnerable suffering, and our most valuable social asset, our welfare system, being dismantled. We have a moral responsibility to uphold it.

Today's Quakers from Kendal and Sedbergh Area Meeting are travelling around 360 miles. On 3 August In London they will present a declaration to 10 Downing Street written in the style of Margaret Fell's.

They will present compelling evidence supporting and validating their concern. They are appealing to the government to:

Quakers have long worked for equality, social justice and the dignity of all. The “Ride for Equality and the Common Good" is being organised by Kendal and Sedbergh Quakers. It comes in the context of Quakers nationally having lobbied against many aspects of recent welfare changes.

Sally Ingham, one of those riding says, “The Welfare State grew out of a vision 75 years ago to reduce poverty, disease and lack of education and provide care for each of us when ill or unemployed or old. Our welfare system protects all of us against life's contingencies.

“Despite the debts after World War II we chose to afford it. We believe we can choose to afford it now and we must: the social cost of not affording it is incalculable.

“We should not stand by and watch the most vulnerable suffering, and our most valuable social asset, our welfare system, admired throughout the world, being dismantled. We have a moral responsibility to uphold it."

The riders will carry postcards of stories of those affected by welfare cuts. These will be presented to MPs.

Why are Quakers riding for equality?