Peaceful protesters, known as the #Stansted15, have been sentenced for endangering safety at aerodromes. Three of them were given nine month sentences suspended for 18 months and ordered to carry out unpaid work. Eleven defendants were given community orders and must carry out 100 hours' unpaid work. One was given rehabilitation activity. Quakers are supporting the group who say their nonviolent direct action was in defence of human rights.

Originally the 15 were charged with aggravated trespass. Four months later they were informed they faced the very serious terrorism-related charge of endangering safety at aerodromes.

Quakers respect the laws of the state but our first loyalty is to God's purposes. Sometimes actions which are legally wrong can be morally right.

The fifteen locked themselves round a deportation plane at Stansted Airport, knowing that many of those on board would face persecution on deportation. The plane had been chartered by the Home Office to take people from UK detention centres to Africa on 28 March 2017.

Responding to today's news, Helen Drewery, Head of Witness and Worship for Quakers in Britain said, “The charge throws into question this country's respect for the right of every individual to peacefully protest. We are relieved there are no custodial sentences. Quakers will continue to work with others for a peaceful world using the skills and tools of nonviolence."

“Quakers respect the laws of the state but our first loyalty is to God's purposes. Sometimes actions which are legally wrong can be morally right. As a faith community we will continue to challenge the government on its deportation policy and will stand alongside those facing the weight of the immigration system. Quakers seek to answer that of God in all people equally."

Helen Drewery continued, “It's deeply disturbing that protesters who took nonviolent direct action and at no time placed anyone else in danger (even if they caused some level of disruption) should face terrorism-related charges.

SENTENCES: Edward Thacker, Alistair Tamlit and Melanie Strickland: 9 months sentence suspended for 18 months. All are ordered to carry out unpaid work. All other defendants were given 12 month community order and 100 hours unpaid work plus exclusion order except May McKeith who will instead undertake 20 hours rehabilitation activity due to ill health.

After a nine-week trial the jury at Chelmsford Crown Court found all fifteen defendants guilty of intentional disruption of services and endangerment at an aerodrome under the 1990 Aviation and Maritime Security Act. 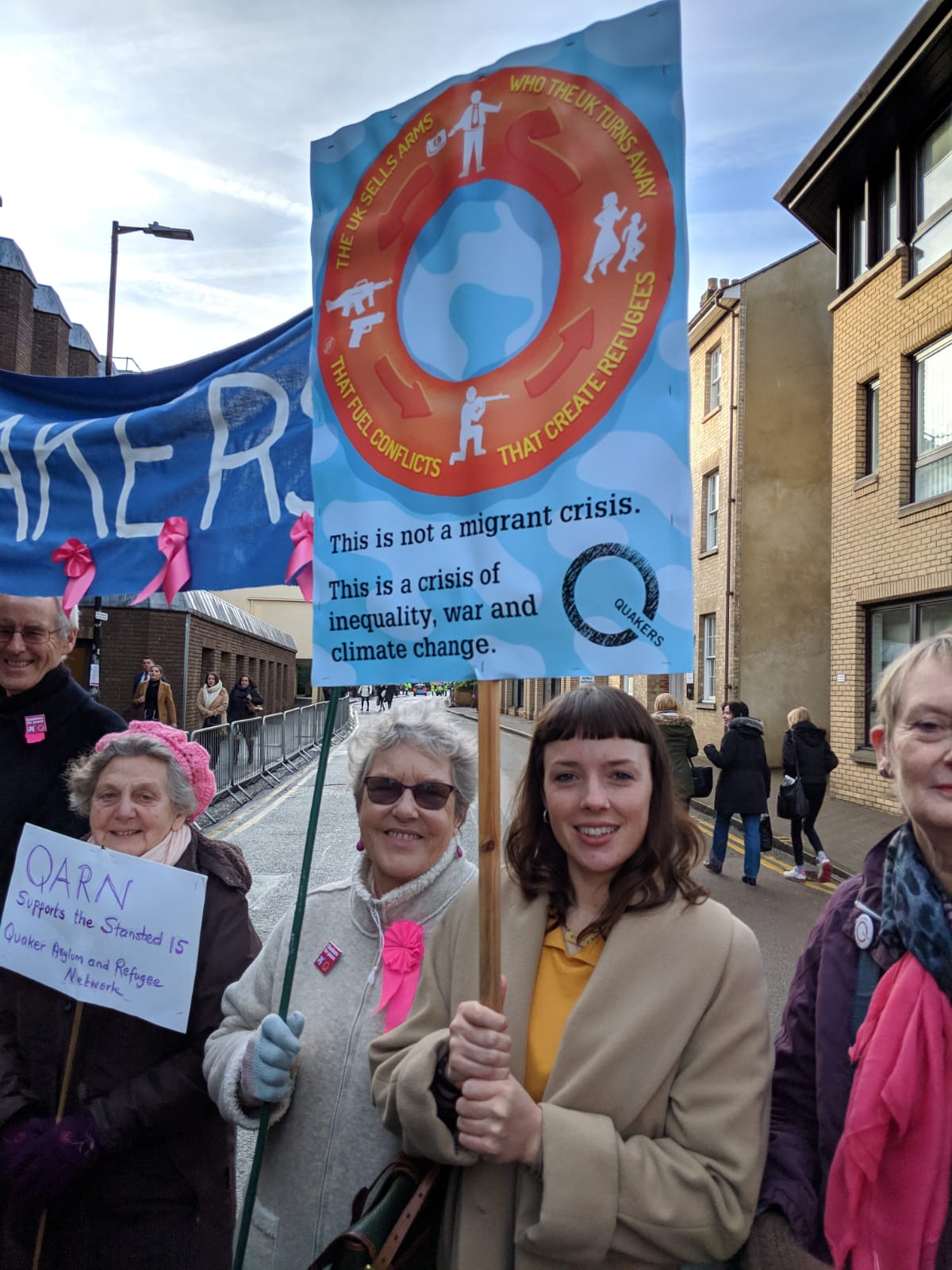 One of the fifteen, Lyndsay Burtonshaw attends Brighton local Quaker meeting. She spoke of the importance of Quakers from Chelmsford being prayerfully and practically alongside them. Her arrest was recorded in the Quakers' Court and Prison Register. This is a historic list of Quakers who have broken the law, because of their personal commitment to their faith.

Quakers are working to end deportations in the UK through the Sanctuary Everywhere Programme.

One of the deportees on the flight was quoted in The Guardian as saying the protestors were heroes not criminals. He said, “The Stansted 15 were trying to stop the real crime being committed. Without their actions I would have faced the utter injustice of being deported from this country without having my (now successful) appeal heard. My message to them today is to fight on. Your cause is just, and history will absolve you of the guilt that the system has marked you with."

Nonviolence: a tool for justice