This event has ended.

MPs will vote this month on whether or not to replace Trident, the UK's nuclear weapons system. It's vital that as many MPs as possible hear from their constituents before the vote.

Join us for a mass lobby of MPs on Wednesday 13 July and tell your MP why you want them to Stop Trident. 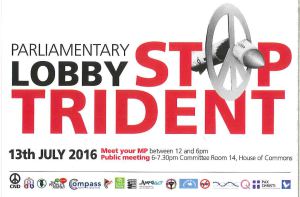 In partnership with the Campaign for Nuclear Disarmament and twenty other national organisations Quakers will be attending a mass lobby of MPs in the Westminster Parliament. Those not in London can still join in the action and make an appointment to lobby their MP.

Hundreds lobbied their MPs last November. Let's make this lobby even bigger; it could be the last chance ahead of the vote. If you've never taken part in a lobby event before there will be experts on hand to help you.

You can contact your MP and ask them for a meeting using the CND website. You don't need an appointment to take part, but it's advisable to make an appointment in case your MP is busy.

More information about the lobby is available from CND.