Quakers that attend local meetings are also members of regional collectives known as area meetings. Area meetings in Britain collectively manage millions of pounds of investments, and almost half of them now have zero investment in fossil fuels. More than 30 per cent have actively chosen to divest huge sums from the fossil fuel industry.

Here are three examples from Quakers around the country:

Some Friends raised interesting questions about the degree to which disinvestment is 'gesture politics' or hypocritical. Most of us use power generated from fossil fuels, and use plastics which are products of fossil fuels, or might benefit from pensions which hold funds in firms engaged in fossil fuel extraction.

As usual, the Quaker business method allowed us to recognise the reality of the challenge. But we also discovered our unity around wanting to signal that we understand the pressing need to reduce human reliance on fossil fuels.

We didn't encounter practical problems when it came to divesting. It was straightforward, thanks to help from our investment managers, Rathbone Greenbank Investments Ltd. Treasurers who are starting the process themselves: Don't over-complicate it. Check with your investment manager first if it will be possible to enact any revised investment policy you adopt.

A number of different things sparked our concern: Quaker Peace & Social Witness's (QPSW) concern around divestment, items in the news, worries about the effects of fracking and tar sands extraction, and reports from Friends who had attended Meeting for Sufferings and sustainability courses at Woodbrooke.

We handed out copies of the QPSW leaflet on divestment (PDF), which helped Friends understand the issues. The decision at our area meeting was less about 'shall we divest' than 'shall we insist on total divestment, or allow small investments in British gas production?' We chose the latter, as it allowed our investment managers to access funding platforms that otherwise invest in sustainable fuel.

It felt real to us in October when we completed our transfer to Rathbone Greenbank, who also manage Britain Yearly Meeting investments. We hope that the regular updates that they send will be useful for letting Friends know how they are investing our money.

We started the divestment process in response to interest. People here are acutely aware of what is happening in the world around.

After some discussion, the trustees reached their decision easily. There was no real argument or resistance. It was something we had to do in terms of the environment and humanity.

We did notice when the income dropped a bit – but we managed it. There is no reason from a Quaker point of view not to be divesting. Each meeting ought to look closely at where their money is and what effect it is having on populations around the world. Britain may be a rich nation but it is so because it has exploited other people's down the centuries, through slavery, sugar, tobacco, oil extraction, and alcohol and arms sales today.

Sunniva supports Quakers to take action on climate change, live sustainably and be agents of change in their communities.

These accounts of divestment are excerpts from the Spring 2018 edition of the Earth and Economy journal. To order a free paper copy, email sukif@quaker.org.uk. 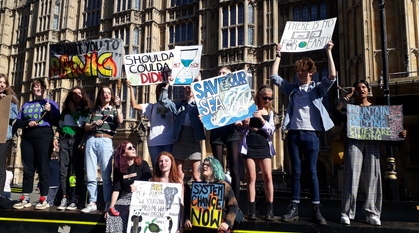 The Youth 4 Climate school strikers are calling for a better education. Olivia Hanks looks at their important new campaign Teach the Future. 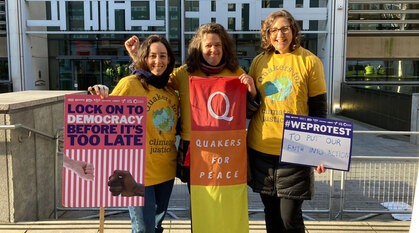 Last push to defend our right to protest

Grace Da Costa shares an update on the campaign against the Policing Bill, and suggests actions to take to defend the right to protest.