Quaker and one of the Peace Tax Seven, Robin Brookes, explains how working for a world without war led to his involvement with Conscience and the campaign to spend taxes for peace.

This Saturday 15 May I am taking part in the National Conscientious Objectors (CO) Day Ceremonies. I have been a conscientious objector to military taxes since the 1980s when I was given a leaflet from Conscience: Taxes for Peace Not War, awakening me to the fact that I pay for military preparation for wars through my taxes. I was already agitated about cruise missiles being stationed at Greenham Common and was an active member of our local peace group, giving support to the Greenham Women. Of course, this is how military force is financed, in fact it is the only way. I acted on my objection in 2003 when the Iraq war started and I refused to pay any of my 2002 income tax.

Since 1916 UK citizens have had the right to refuse military service on grounds of conscience. The Military Service Act contained a clause to allow anyone who had an objection on moral grounds, to perform alternative service instead. Three Quaker MPs, Arnold Rowntree, T. Edmund Harvey and John E. Barlow worked hard to win this amendment to the act. The right to conscientious objection to military service has spread around the world and is declared a human right by the UN (in Article 18 – the right to freedom of thought, conscience and religion).

This was not the first time that a nation state granted the right to opt out of military service on grounds of conscience. Some states in the US in the latter part of the 18th Century (Pennsylvania, New York for instance) allowed Quakers to not serve in the militia on payment of a tax which would go to buy arms, uniforms etc. This was echoed in Colombia until recently. Young men rich enough could buy a card from the government to release them from military press gangs.

Taxes have nearly always been raised for the purpose of funding wars. Income tax was first raised to fund British forces in the Napoleonic Wars. Nowadays most of our taxes are spent on socially useful matters – education, the health system, social security, but this was not always the case. This makes the situation morally difficult, how can I separate the money I pay for war from the money flowing to welfare?

Taxes for peace, not war 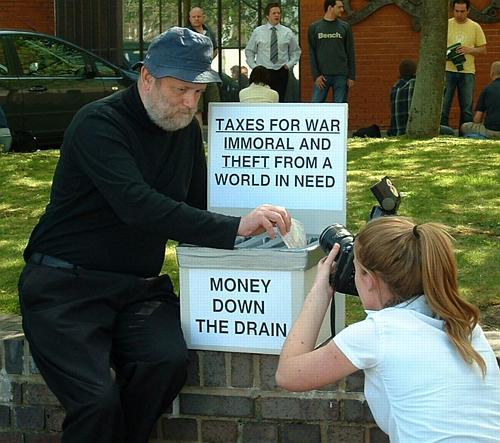 Conscience works for a world where taxes are used to nurture peace, not pay for war. It campaigns for a provision in tax law to allow conscientious objectors to divert the military proportion of their taxes to a peace fund. Conscience has presented five bills through parliament, twice getting through the first reading. This initiative continues and they are working on the next bill which they hope to present to parliament in 2023. They also give support and advice to COs who have decided to withhold taxes.

Conscience is inevitably concerned about how money in a peace tax fund would be spent. It has co-ordinated a collection of peace organisations involved in direct talks with government ministers on how to resolve conflict peacefully. The tools for nonviolent conflict resolution have developed to a sophisticated level. I recommend the Oxford Research Group's book 'Conflict Prevention Works'.

The money could be more effectively spent solving the underlying problem in a conflict rather than fighting a war. War doesn't work. Just look at what the Iraq war has brought. It is a more dangerous place than when it was under dictatorship, the Foreign Office advises against travel to there. It has fuelled terrorism, creating an even more vicious group than Al Qaeda. Bush and Blair basically set alight the Middle East.

There are other war tax resistance and peace tax campaigns around the world, particularly in the US, Canada, Germany and Spain. Every two years there is an international conference, hosted by the national organisations in turn. Last time this was in Edinburgh and the next will be in Geneva. In 1994 Conscience and Peace Tax International was founded at one of these conferences. It is now a consultative body with the UN and continues to make representations on behalf of COs claiming their human rights are being infringed by being made to pay for war. I have given one of these presentations to the UNHCR on my own case.

Conscientious Objector Day Ceremonies are carried out at CO memorials around the country and particularly in Tavistock Square, London. This year, as last year, it will take place online, and will be livestreamed at 4.30pm.

Find the details of how to join in CO day